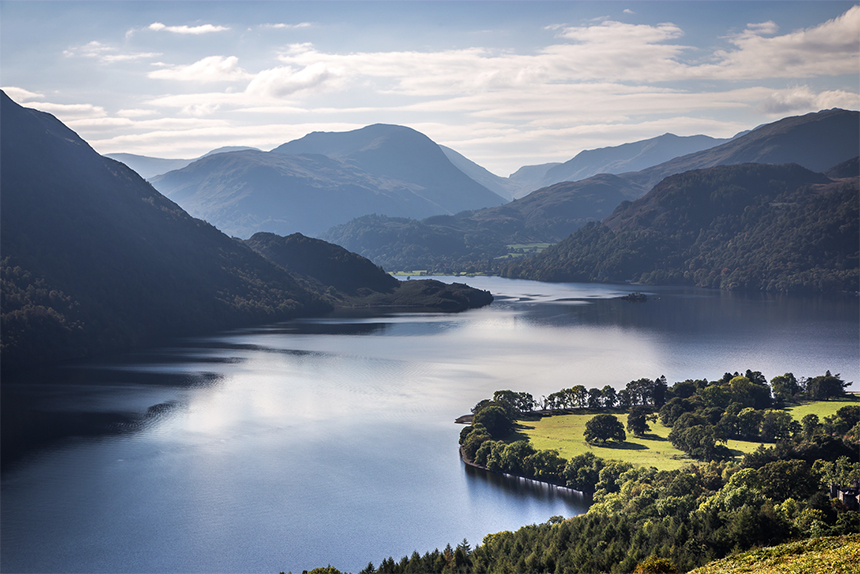 Ullswater – Our Lakes series – The second largest lake in the Lake District is described by its own visitor centre as the most beautiful. 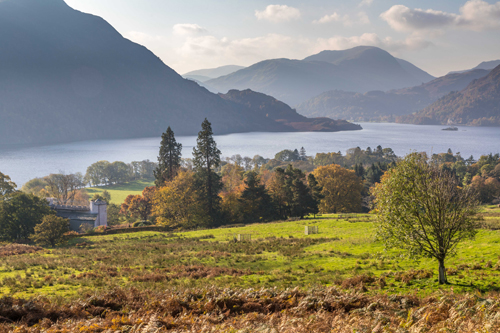 They would say that of course, but anyone who stands on Ullswater’s shores would be hard-pressed to dispute the claim. Whether the beauty of the surroundings played any part or not, William Wordsworth’s famous Daffodil poem was inspired by flowers on the lakes shore. 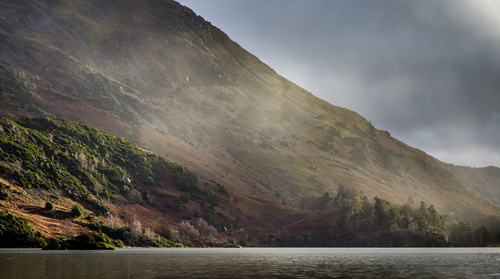 Ullswater is a typical Lake District narrow ribbon shape formed after the last ice age by three glaciers carving through the landscape, scooping out the valley floor with meltwater filling the void. The surrounding mountains give it an extenuated Z shape, which may also give rise to the lake’s name. 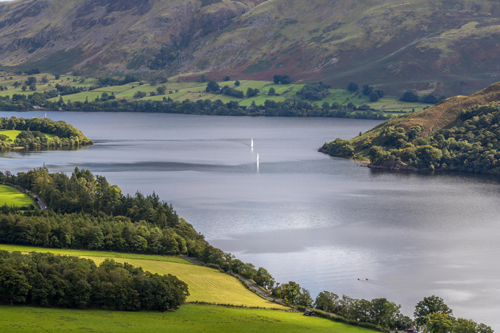 The origin of place names in Cumbria is always contentious and often uncertain, Ullswater is no exception. Some suggest that the lake’s elbow shape may give rise to the name, ‘Ulfr’ is the Old Norse noun meaning ‘wolf’ and its distinctive dog-leg bend may be the reason. However, others claim it comes from the name of a Nordic chief ‘Ulf’ who ruled over the area, although there was also a Saxon Lord of Greystoke called ‘Ulphus’ whose land bordered the lake. 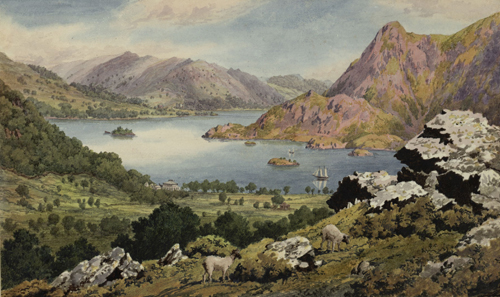 It may have been named Ulf’s Water in honour of either, or it may even be named after the Norse god Ullr. Chances are we’ll never know for sure but Hodgson Hill, an earthwork on the northeast shoreline, is thought to be the remains of a Viking fortified settlement.

At 250 feet deep, it’s the third deepest English lake and it’s nine-mile length traditionally formed the border between the historic counties of Cumberland and Westmorland. The lake has been a tourist destination since the mid-18th century and by the 1890s, Ullswater was a fashionable holiday destination for the British aristocracy due to its favourable sailing conditions and proximity to fell shooting estates. 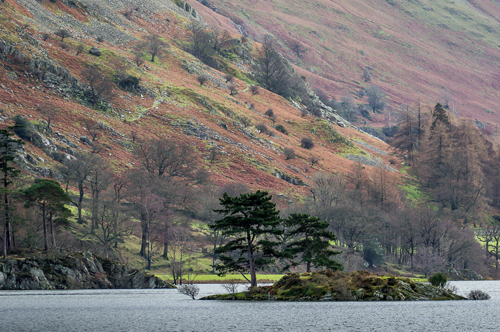 Ullswater still draws huge numbers of holidaymakers and the Steamers are a must-do for anyone visiting the area. Originally, they were working boats from the 1850s moving mail, workers and goods to and from the Greenside Mine at Glenridding. They now offer trips around the lake calling at Pooley Bridge, Glenridding, Howtown and Aira Force. 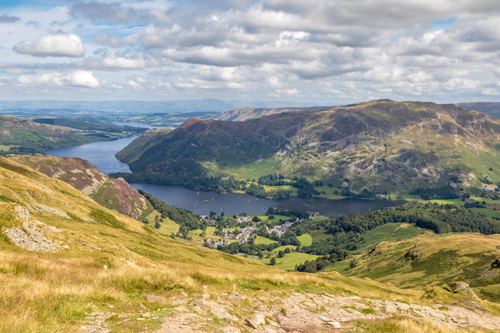 The Steamers are a wonderfully sedate way of taking in the lake but Ullswater has seen its share of thrills too when Donald Campbell set the world water speed record on Ullswater on 23 July 1955. He achieved his first world speed record piloting the jet-propelled hydroplane “Bluebird K7” to a speed of 202.32 mph. Ullswater was also used to test mini-submarines, naval craft and flying boats during World War Two. 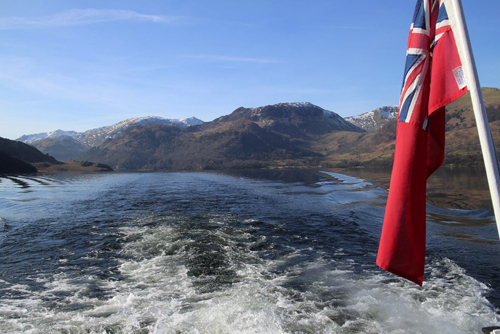 The Steamers are also a jumping-off point for some of the finest walking in the Lake District and people often catch one from Glenridding to Howtown, returning on foot along the shore to complete a lovely and scenic low-level walk. Those looking to head up the fells are in for a treat too and Glenridding is a popular starting point for walkers and going up Helvellyn, England’s third-highest mountain, in a walk that features the dramatic Striding and Swirral Edges. 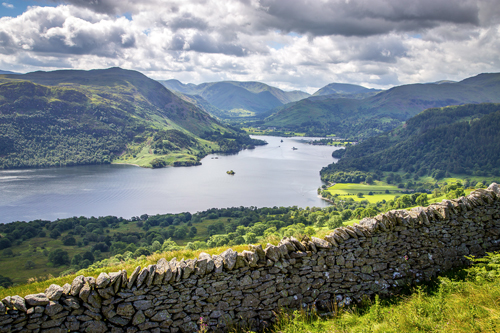 The waterfall of Aira Force is a favourite amongst visitors and Hallin Fell, Gowbarrow Fell, Place Fell, Arthur’s Pike and Little Mell Fell all provide wonderful walking and beautiful views. The 20-mile walking route, the Ullswater Way, was officially opened in 2016 and uses existing Public Rights of Way and quiet roads which circumnavigate Ullswater and access local attractions. 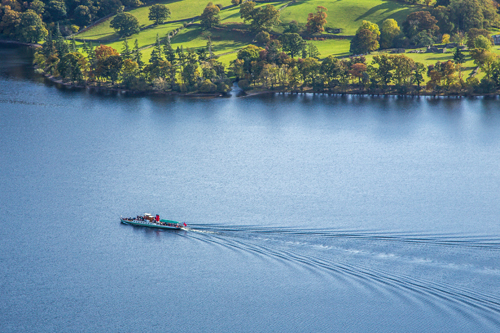 Heading south beyond Ullswater brings travellers through Patterdale, past the charming Brothers Water and then up over the highest mountain pass in the Lake District, Kirkstone Pass, before dropping down to Windermere.

For more on Our Lakes Series please check out… 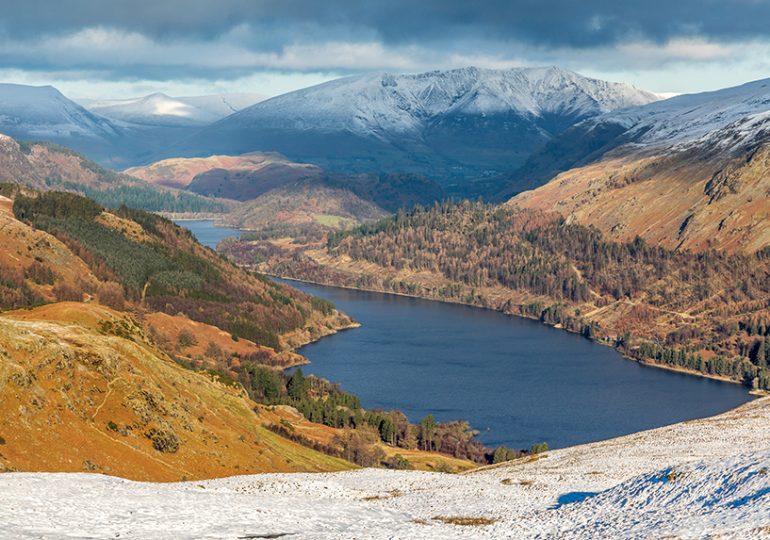